A Bit of Background

Vitanova has many historical links to the City of Vaughan, Ontario, Canada.
The meeting of April 23, 1987—at which it was decided to create a non-profit corporation  and charity to address the issue of substance abuse in the local community—took place in the offices of VitaSana/The Family Health Magazine, at 3300 Steeles Avenue West, in the area in Vaughan known as Concord.
Shortly thereafter, VitaSana moved to 10 Director Court, Woodbridge, from which offices the very first Vitanova fundraiser was organized—an operatic concert featuring soprano Maria Pellegrini, held at York University’s Burton Auditorium.
By 1989, counselling groups were being run from a bungalow, now demolished, at 7720 Kipling Avenue, just south of Highway 7, in Woodbridge.
In June 1990, Vitanova moved to 90 Winges Road, Woodbridge, to an 11,000 sq. ft. space, enough to accommodate offices, meeting rooms, a small gymnasium, a kitchen and ceramic workshop.
In 1995 Vitanova moved to its present location, the subject of this plaque. 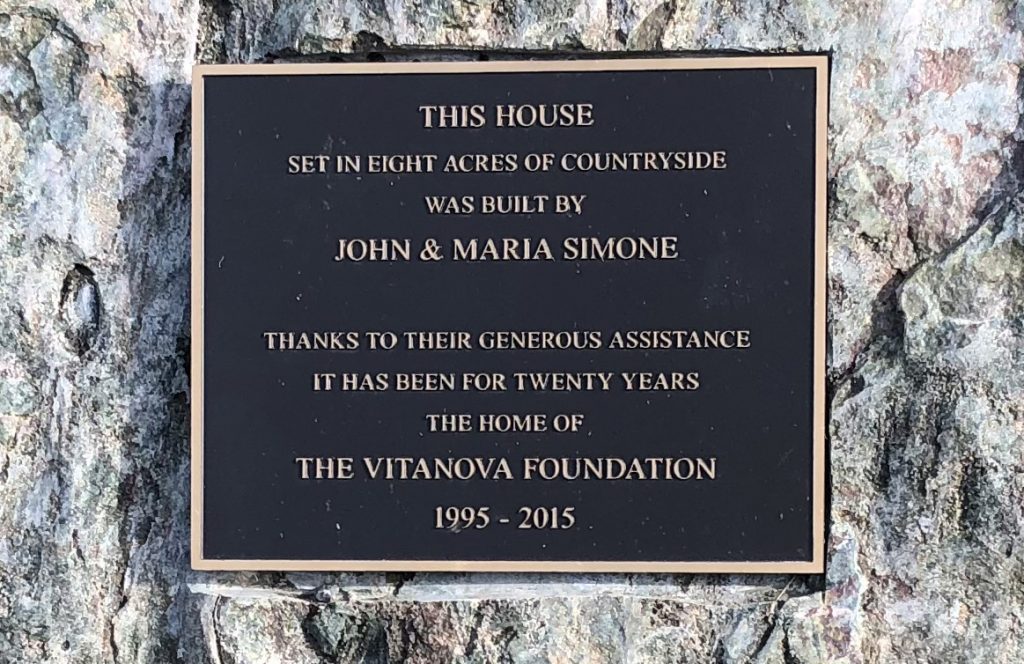 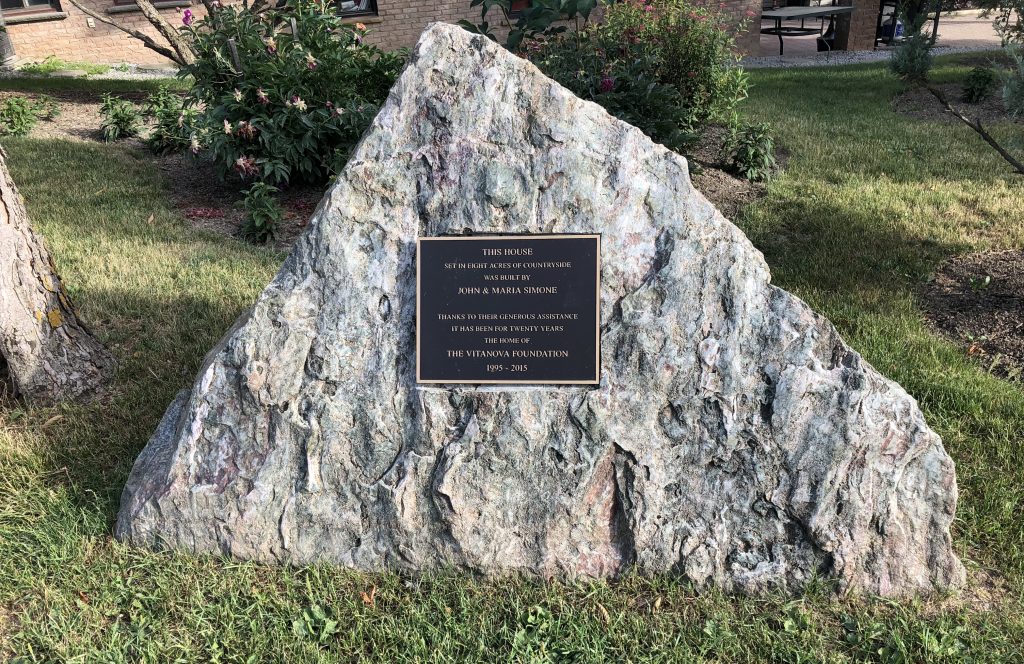 Set on eight acres of rural land on the edge of  Woodbridge, in the City of Vaughan, Ontario, Canada, a former 17,000 sq.ft. residence now houses Vitanova’s offices, meeting rooms, 34-bed shelter, indoor pool, gymnasium, and more. Most of the property is open space—rolling lawns, playing fields, a vegetable garden, and wooded areas beside a creek, along with barns, and a bocce court. The overall impression is one of peace and quiet. 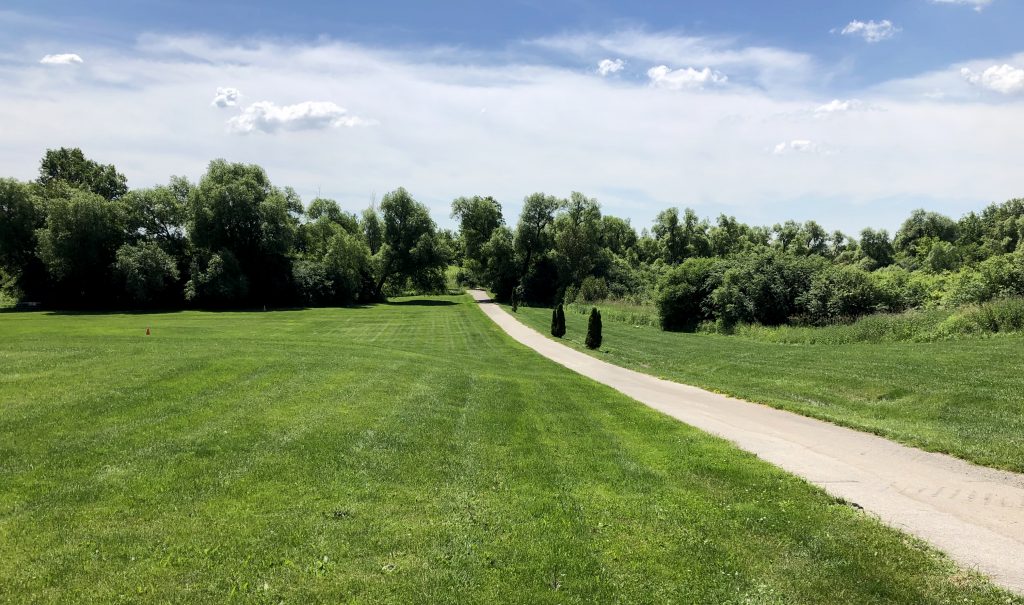 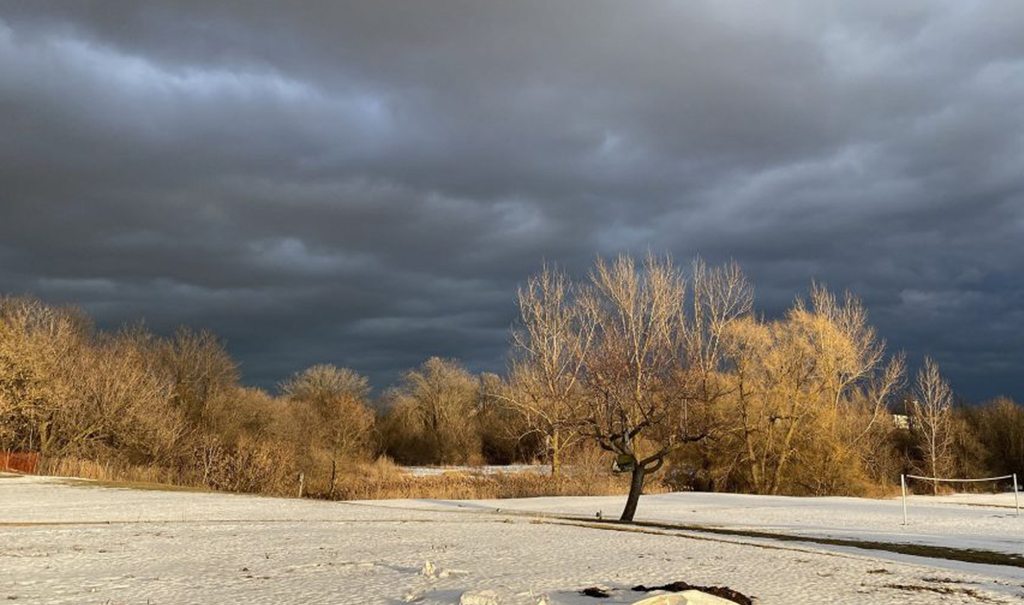 The Fountain of Grace was the gift of nearly thirty construction-related companies based in the Greater Toronto Area. The project was the idea of Frank Aquino of Aquicon Construction, and was completed in 2003, serving ever since as the focal point of our “front yard”, the three or so acres between our main building and Rutherford Road. 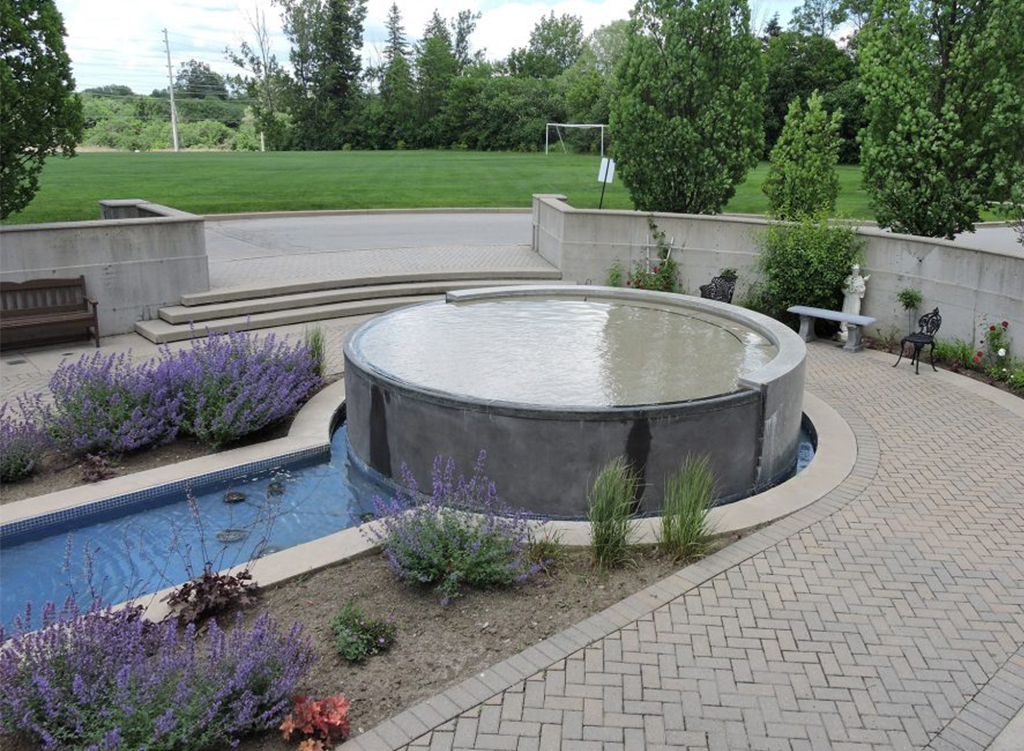 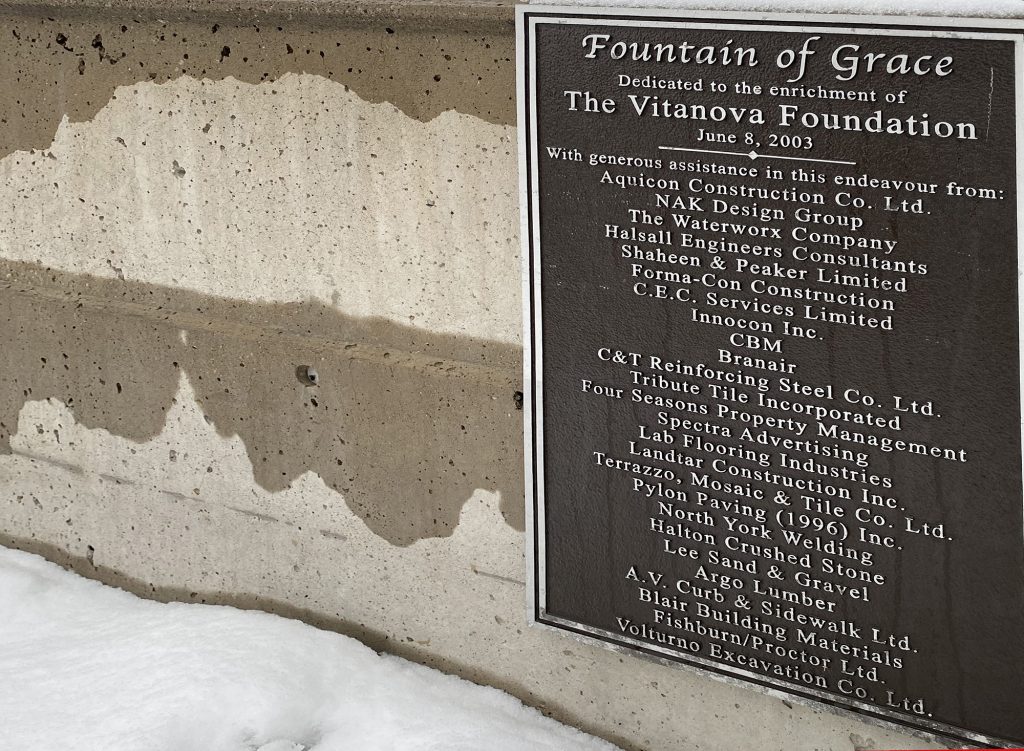 The bocce court, located just behind the main building and near to the east side of the property, was the gift of the Maxey Valley Bocciofila Club, one of the oldest such clubs in Woodbridge. Its then-president, Mario Iacobelli, headed up the project from start to finish.

The coop is one of our latest projects, now completed and awaiting its first full-time residents. The general opinion among those familiar with poultry housing design is that Vitanova’s coop is “palatial”. 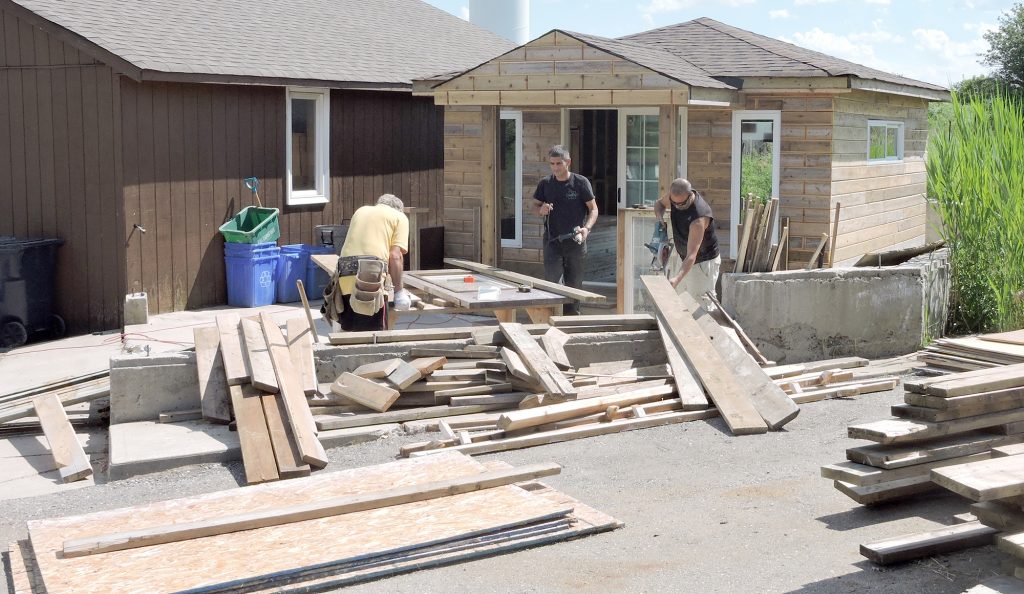 This being Canada, a vegetable garden is a seasonal project, but one that has always proven successful year over year. Thank you to the many experienced vegetable gardeners who have taught and mentored our clients in this important art and science.

The coop is one of our latest projects, now completed and awaiting its first full-time residents. The general opinion among those familiar with poultry housing design is that Vitanova’s coop is “palatial”.

The swimming pool—now subject to operational standards appropriate to an institutional setting and filled with salt water—-reflects its age in the design of its surrounding. It may bespeak the 1970’s, when it was built, but it is a popular amenity. 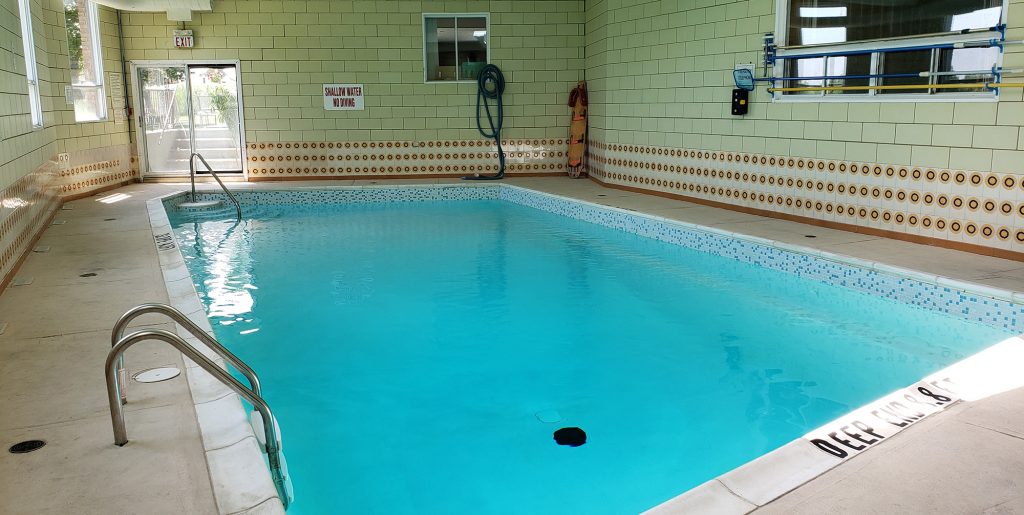 The soccer pitch, located on the front lawn, features an illuminated sign reading “COURAGE”. It is meant to inspire those who play the beautiful game, as well as those who may from time to time find themselves struggling with their recovery. 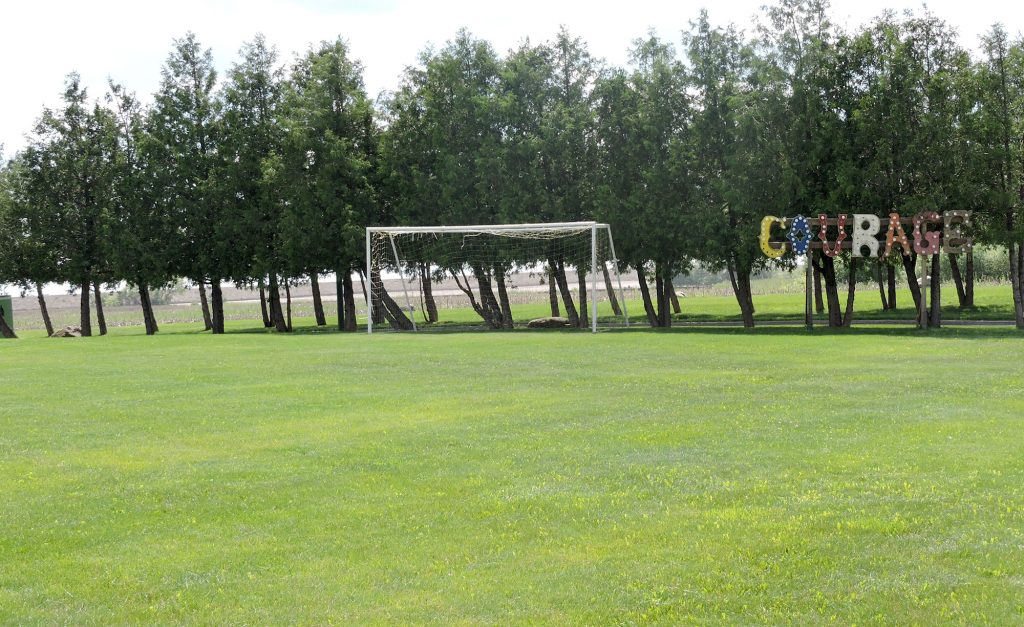 There is a lot of open space at Vitanova, a feature that encourages clients’ appreciation of the natural environment and contributes, we believe, to recovery. 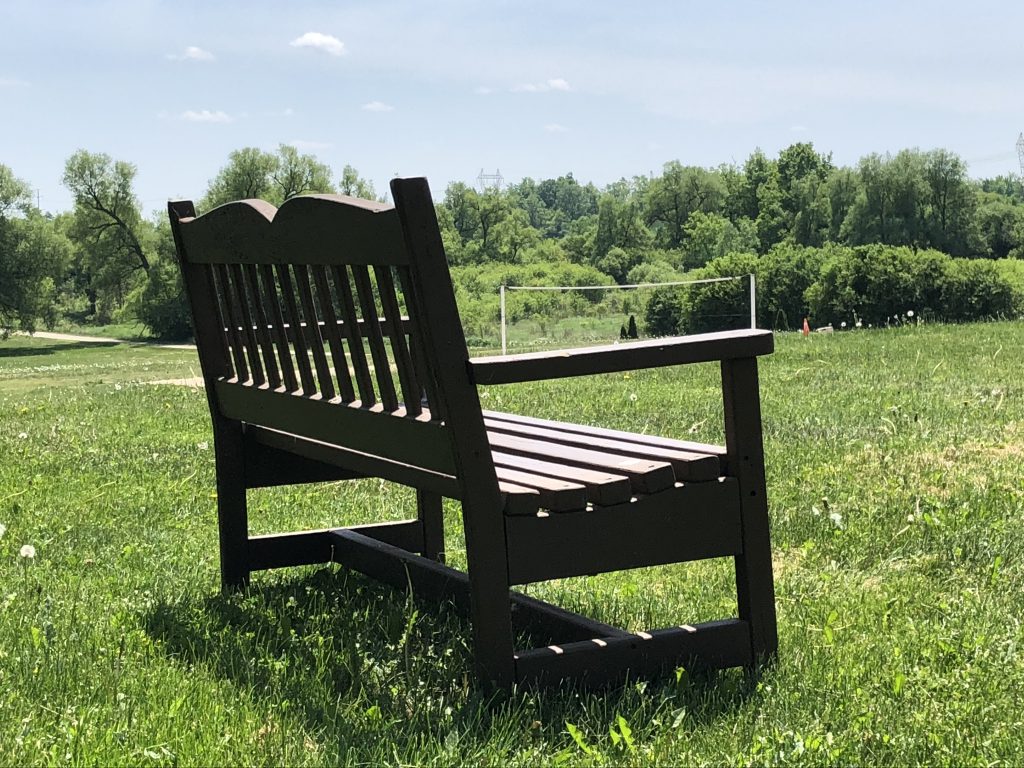 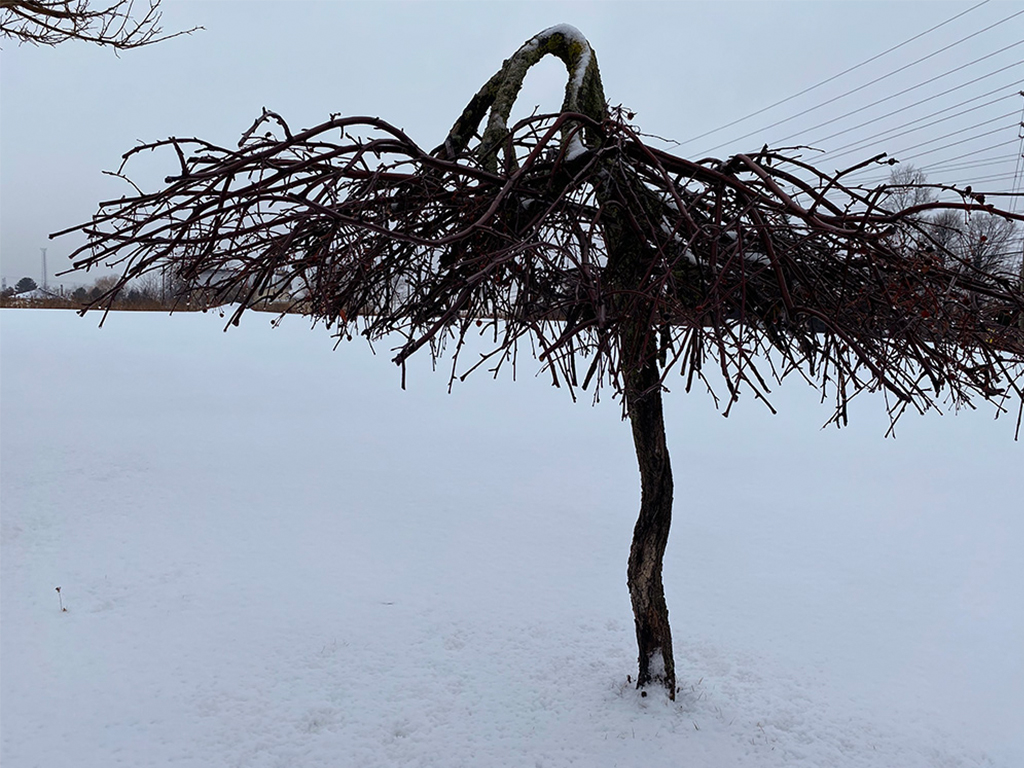 An external elevator, adjacent to the parking lot on the west side of the property, links all three floors for those needing added accessibility to the main building. 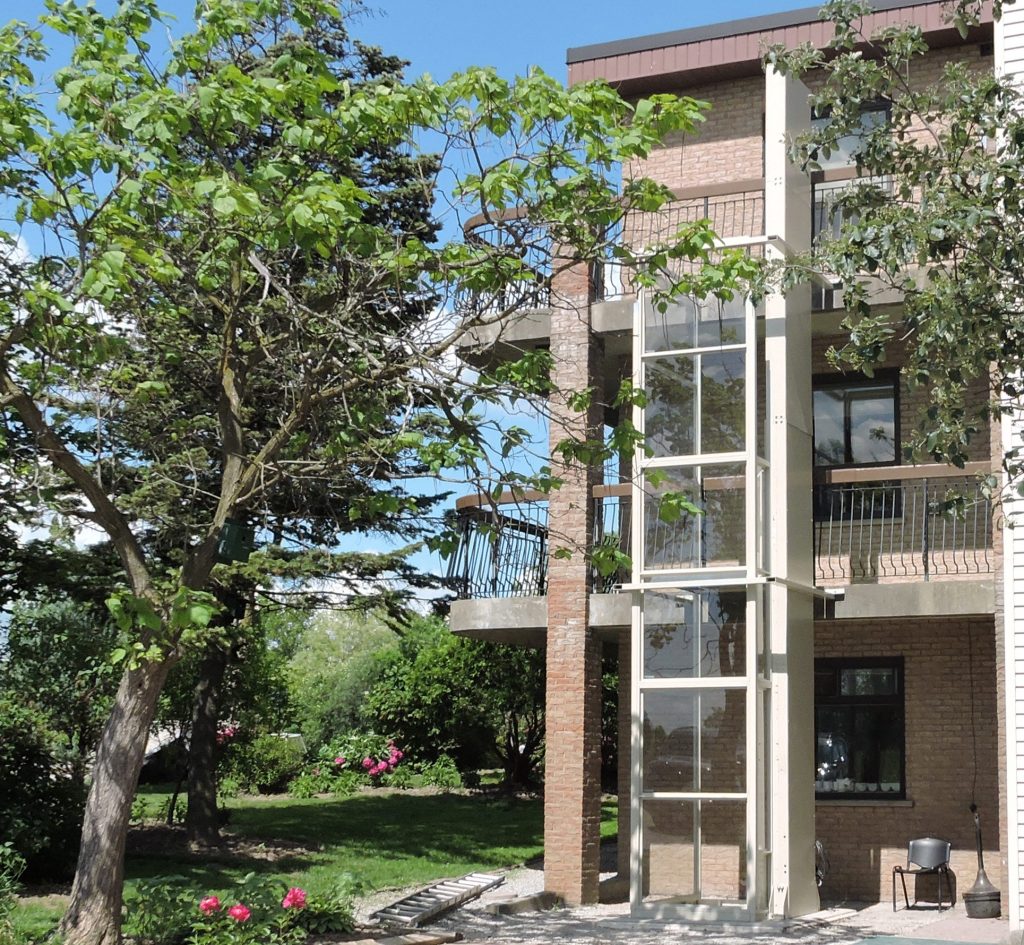 This campus plan—dating from 2002 and featuring the initial proposal for a fountain opposite the principal entrance to the main building—gives a sense of the size of the property and uses to which various areas may be put in future. 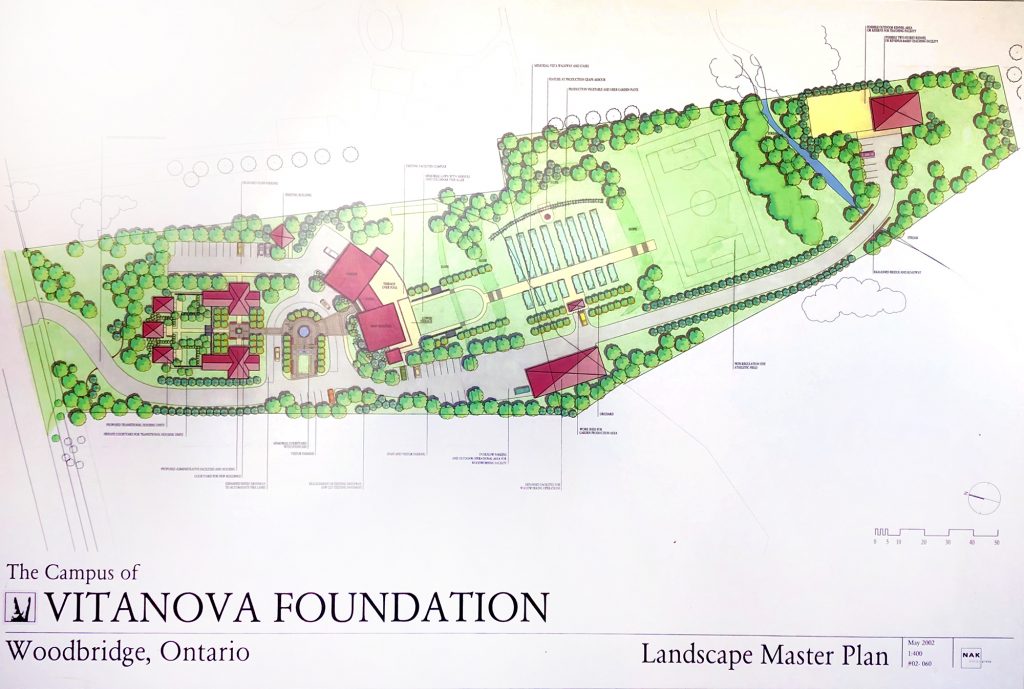 Another long-held dream is of a separate residential treatment centre for women, where services can be provided to mothers who, because of the tender age of their children, are reluctant to be separated from them while pursuing recovery. 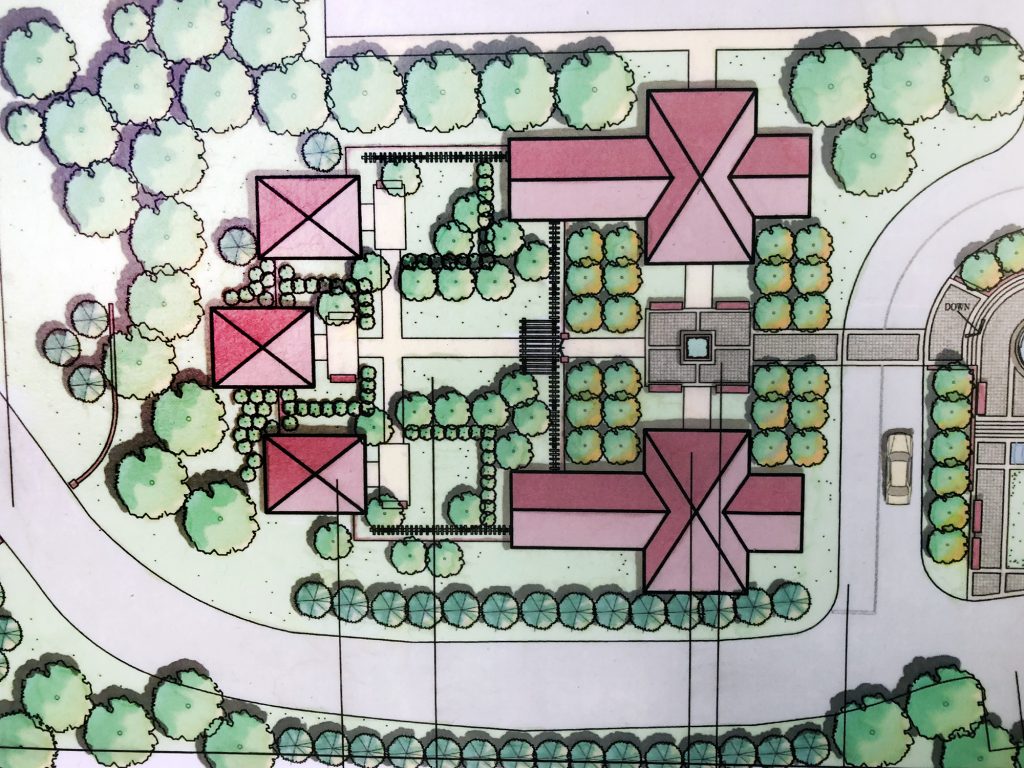